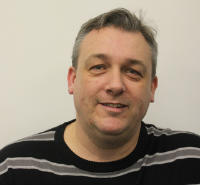 Andy is married to Amanda, and has been  attending Foxhill Evangelical since 1992, and has been an Elder since March 2013. They have two children, Joshua and Rebekah.

Andy plays the drums in the worship group and occasionally becomes a puppeteer!!

He has been a Christian since 1988, and has spent time in many schools delivering Christian assemblies on behalf of Counties and CENs. He has also written and performed Christian sketches for different Churches and groups.

Andy is a manager for Morrison Data Services, working in the gas and electric industry.